A calf lies dead in the slatted stall in which it stood for all of its life, with
no mother, sunlight or decent food. This is the fate of a calf raised for veal
The veal calf industry is one of the most reprehensible of all the kinds of intensive animal agriculture. Veal calves are a by-product of the dairy industry; they are "manufactured" by "milk machines" - dairy cows. Female calves are raised to be dairy cows: They are confined and fed synthetic hormones to increase growth and production and antibiotics to keep them alive in their unhealthy, unnatural environments. They are artificially inseminated and, after giving birth, are milked for several years until their production levels drop, then they are slaughtered.

Male calves are taken from their mothers shortly after birth. Some are slaughtered soon after birth for "bob veal." Others are raised in "open pens," a kind of minimum security prison, and even then they are sometimes chained. Most are destined for the veal crate.

The veal crate is a wooden restraining device that is the veal calf's permanent home. It is so small (22" x 54") that the calves cannot turn around or even lie down and stretch and is the ultimate in high-profit, confinement animal agriculture.(1) Designed to prevent movement (exercise), the crate does its job of atrophying the calves' muscles, thus producing tender "gourmet" veal.

The calves are generally fed a milk substitute intentionally lacking in iron and other essential nutrients. This diet keeps the animals anemic and creates the pale pink or white color desired in the finished product. Craving iron, the calves lick urine-saturated slats and any metallic parts of their stalls. Farmers also withhold water from the animals, who, always thirsty, are driven to drink a large quantity of the high-fat liquid feed.

Because of such extremely unhealthy living conditions and restricted diets, calves are susceptible to a long list of diseases, including chronic pneumonia and "scours," or constant diarrhea. Consequently, they must be given massive doses of antibiotics and other drugs just to keep them alive. (The antibiotics are passed on to consumers in the meat.) The calves often suffer from wounds caused by the constant rubbing against the crates.

A Fate Worse Than Death

About 14 weeks after their birth, the calves are slaughtered. The quality of this "food," laden with chemicals, lacking in fiber and other nutrients, diseased and processed, is another matter. The real issue is the calves' experience. During their brief lives, they never see the sun or touch the Earth. They never see or taste the grass. Their anemic bodies crave proper sustenance. Their muscles ache for freedom and exercise. They long for maternal care. They are kept in darkness except to be fed two to three times a day for 20 minutes. The calves have committed no crime, yet have been sentenced to a fate comparable to any Nazi concentration camp. 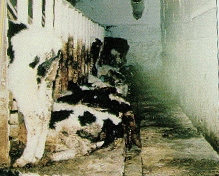 What You Can Do

To help stop veal calf abuses, don't buy or eat veal, and tell friends, relatives, and neighbors why. Tell restaurant managers about veal cruelties and ask them to remove veal from their menus. Also, don't buy or eat dairy products, because of the dairy industry's role in veal production. Ask your state legislators to sponsor bills that would prohibit the use of veal crates.