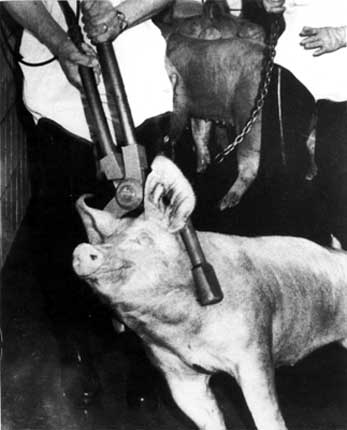 &nbspPigs are gentle, sensitive, intelligent and highly social creatures. They are functionally equivalent - both in their intelligence and capacity to suffer - to human infants and toddlers. The British meat industry kills about 15 million pigs each year. The full horror of their gruesome deaths defies easy description.

&nbspSlaughter first involves 'stunning'. This is followed by throat-slitting. Throat-slitting is also called 'sticking'. The terrified animals are usually stunned electrically by placing tongs on either side of the neck behind their ears.

&nbspIn many cases, the 'stunning' is inadequate. This is because the tongs are not held in place for long enough. In numerous other cases, the tongs are 'incorrectly' placed. Typically, the voltages used are insufficient. In consequence, many pigs regain consciousness during bleeding-out, or even before throat-slitting.

HOME
The Press
Exotic Meat
The ALF FAQ
Meat and Cancer
Animal Rights FAQ
Veal : A cruel meal
Facts on BSE (VIVA)
The Taste of Depravity
Human BSE Foundation
Animal Rights Resources
The Post-Darwinian Transition
The Slaughter of Animals for Food
49 Reasons For Becoming A Vegetarian
How To Be A Vegetarian In Ten Easy Steps